“Are We There Yet?” Where is the Bottom for Bonds?

It has generally been a rough start to the year for global risk assets, with many experiencing weaknesses not seen in decades. For example, looking at the below indices’ worst performing Year-to-Date returns over the last thirty years we can compare the current year and see that the downturn is more significant than many historical benchmarks.1

Both equities and bonds are experiencing multi-decade weakness. Additionally, bonds have also declined by multiples more than their prior-worst return. Given the long lookback period, the current performance of bonds is beyond the general experience of many investors causing some to ask, “Are we there yet? Have bond prices reached the bottom?”

Noting that past performance is not necessarily an indication or guarantee of future results, this week we look at what the future may hold for bond investors given what we have seen in the past.

Potential Lessons from the Greenspan Fed

Given the U.S. Federal Reserve Bank (the Fed) shifted its monetary policy from an accommodative to tightening bias in March by raising rates from the zero-interest-rate bound with a 25-basis point hike,2 we will narrow our focus to the Bloomberg U.S. Aggregate Index (U.S. Aggregate). We also consider the level of hawkishness of today’s Fed, which shares similarities with Alan Greenspan’s 1994 Fed.3 Over the 1994-95 rate hike period, the Fed hiked rates seven times for a total Federal Fund Target Rate increase of 3.0% - from 3.0% to 6.0%. Of these hikes, three were 50bps and one was 75bps. Given the current outlook for rate hikes as highlighted by Bloomberg’s World Interest Rate Probability showing the market expects 8 more 25bps hikes by the end of the year, with two 50bps hikes at the FOMC’s June and July meetings, the hawkishness to today’s Fed is on par with that of the 1994 Fed. 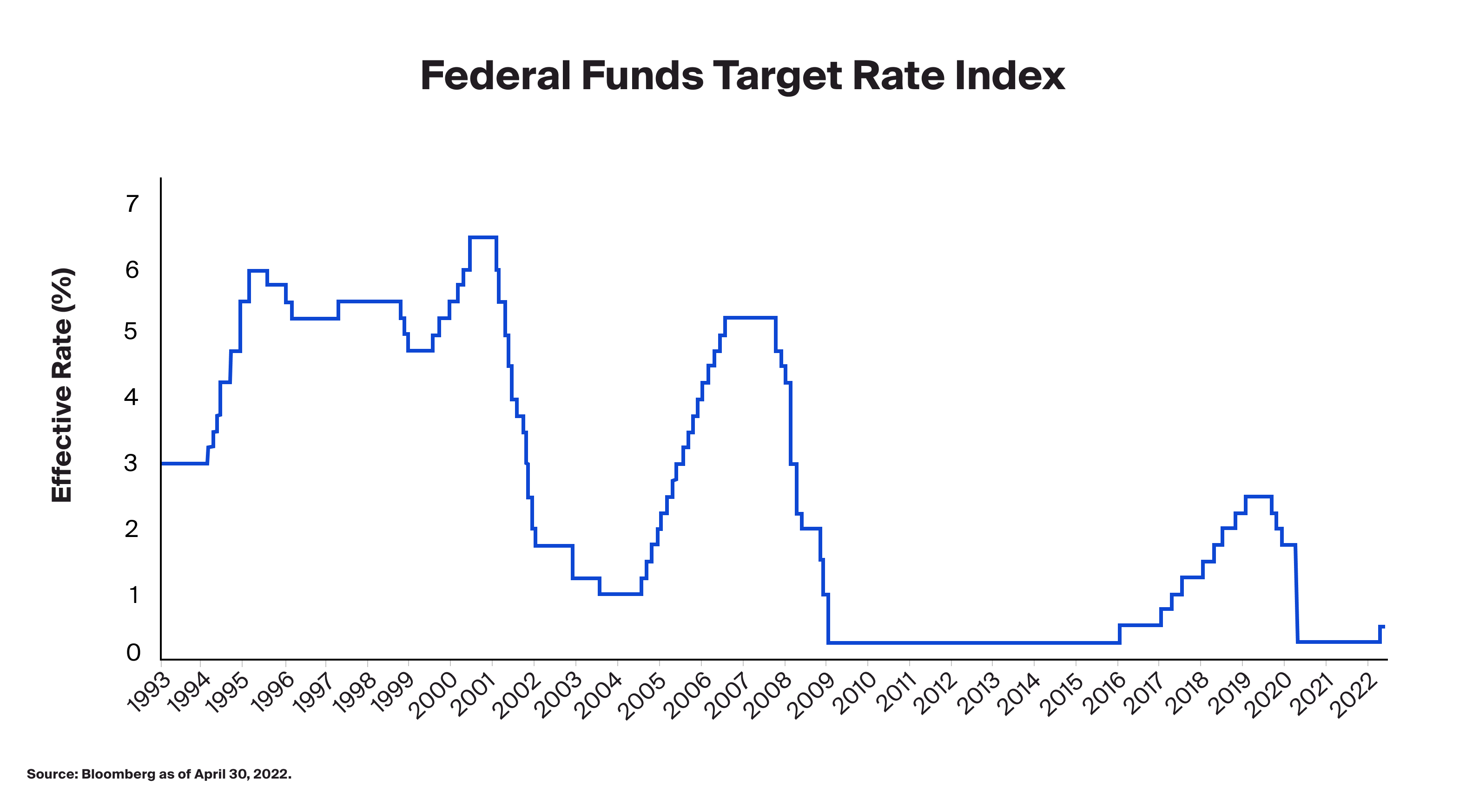 Finally, given all these dynamics, it may be no coincidence that the last time we had such a hawkish policy stance as we did in 1994 corresponds to the prior worst start to a year for the U.S. Aggregate in the last 30 years.

Putting the current performance in perspective below we plot the annual returns for the Bloomberg U.S. Aggregate Bond Index over a 30 year period. As shown in the table above, the index is off to its worst start of the last 30 years at -8.8%, with the prior-worst start being in 1994 when it was down just -3.4% in comparison. 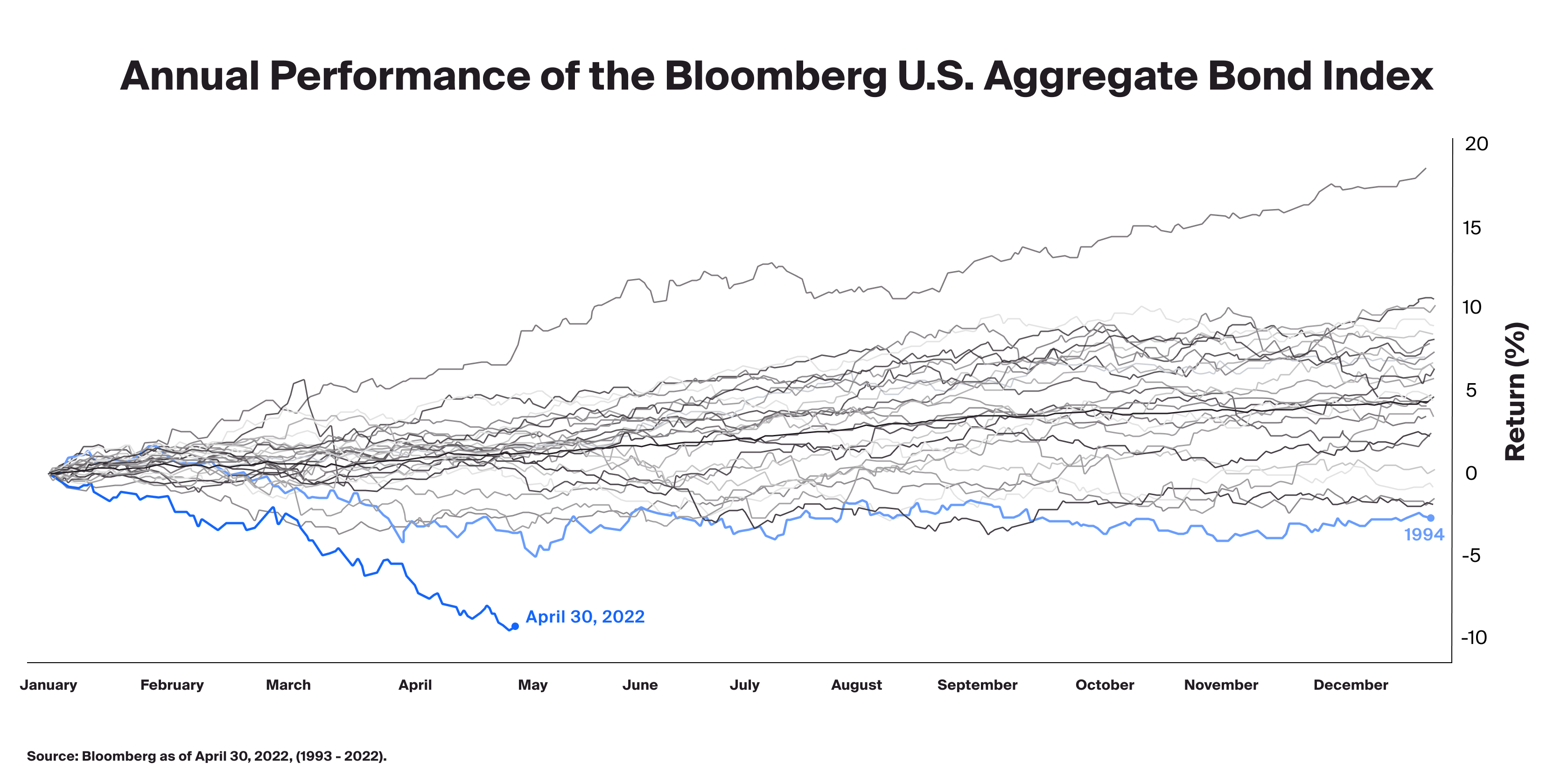 While past performance is certainly no indicator of future performance, we see that the index declined into May 1994 when the Greenspan Fed hiked rates for the first time by 50bps. Then, it continued to trend sideways for the remainder of the year despite another 50 basis point hike in August and a 75 basis point hike in November, ending the year a little firmer at -2.6%.

Currently, we see a similar pattern with 2022, though to a greater magnitude. As seen above, and through 30 April, the index is now down -8.8%. And while we experienced the first 25bps rate hike of the current tightening cycle in March, the index continued lower toward the anticipated 50bps hike in early May. It was the hawkish pivot following the first hike that the market appeared to focus on to determine the size and scope of the tightening, and therefore, may have been the event into which their assessment of the path forward drove weakness in price.

With the highly anticipated 50bps hike now behind us, and the Fed seemingly committed to setting expectations through forward guidance, many investors we speak with are asking themselves, have we reached the bottom for bonds? “Are we there yet?”.

The short answer is that there is no way to know. However, and as is the case with so many other areas of the market and economy, it is the anticipation of an event, not the event itself that can potentially drive returns, so it is possible that investors’ expectations remain anchored, dampen volatility, and possibly mitigate downward pressure on returns.

With that said, should inflation remain elevated, or if the Fed changes tactics unexpectedly, then we could continue to see volatility in bonds continue, as well as other risk assets. In such an uncertain environment, investors may consider diversification of traditional investments by utilizing alternatives, such as hedge funds and other assets with potential to provide portfolios with risk-adjusted return.

For more information about investment opportunities available on the CAIS Platform, contact a CAIS representative.